Introduction
The Take3™ Multi-Volume Plate has proven to be a flexible tool, providing the ability to perform absorbance measurements over a wide range of applications and sample volumes in a BioTek microplate reader. Micro-volume determinations of up to sixteen 2 ¶ÃL samples of extracted, undiluted DNA, RNA and protein-based on native absorbance measurements have been demonstrated with precision and accuracy suitable for downstream applications such as sequencing, qPCR and protein analysis1-3.

The Take3™ Multi-Volume Plate also lends itself to colorimetric assays, where the color-producing reagent is added to the plate subsequent to sample addition. The microspots of the Take3 plate act as both reaction and measurement vessel, which simplifi es workfl ow and conserves sample. It has been demonstrated that quantification accuracy is signifi cantly improved using this workflow relative to workfl ows requiring reagent incubation in a separate vessel4.

Protocols
All Picogreen reactions and measurements were performed in the Take3 plate. A protocol was defined similar to that already demonstrated with the in-situ BCA protein assay5. The protocol and Take3 plate map are demonstrated in Figure 1. Briefly, 2 ¶ÃL aliquots of standard or unknown sample were added to the respective microspots of the Take3 plate. The diluted solution of PicoGreen reagent was then loaded to each microspot in a 1:1 ratio (2 ¶ÃL/microspot) using a manual 8-channel pipettor with mixing. The blank consisted of 2 ¶ÃL of TE buffer reacted with 2 ¶ÃL of Picogreen working reagent in the appropriate microspots of the Take3 plate.

After closing the top lid of the Take3 plate, the reaction was incubated for 5 minutes at room-temperature (~ 22º C), in the dark, then read on either a Synergy H4, using both monochromators and spectral filters or on a Synergy HT Microplate Reader. All measurements were made with Gen5™ Software. 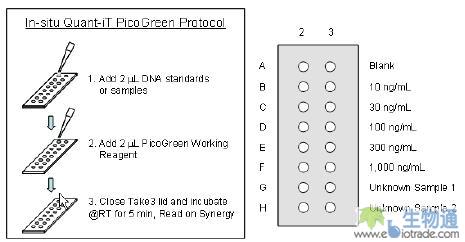 Figure 1. Take3 plate map depicting positions and concentrations of Lambda dsDNA standards and positions of up to four unknown samples. This map provides a 6-point calibration curve run in duplicate over rows A-F, which covers the in-situ micro-volume assay working range of 10- 1,000 ng/mL.

Subsequent to each analysis, both top and bottom slides were wiped 2-3 times with a methanol saturated laboratory wipe to remove any residual reagent and air-dried.

Both dual-monochromator and filter based optical systems of the Synergy™ H4 Hybrid Multi-Mode Microplate Reader and top reading fl uorescence of the Synergy HT was used to quantify the DNA solutions. Monochromator bandwidths of 9 nm were used in all measurements: the excitation monochromator was set to 495 nm and the emission monochromator to 526 nm. It was also determined that a z-axis vertical offset of 6 mm provided highest signal-to-noise ratio when using the monochromators. Spectral filters used by both Synergy H4 and HT were 485 nm, 20 nm bandwidth for excitation and 528 nm, 20 nm bandwidth for emission. All Synergy measurements relied on the Xenon fl ash lamp as the excitation light source (high lamp energy was selected for spectral fi lter determinations on measurements). The automatic sensitivity adjustment feature in Gen5 was used for all data collection with scaling using high DNA concentration wells F2:F3 (1000 ng/mL) to 60,000 relative fluorescence units with 255 measurements per data point.

Take3 plates with white Teflon-printed slides defi ning the microspots can be used with Synergy monochromator optical systems as the cross-section of the detection volume defi ned by the optical system is smaller in size than the microspot dimension. For spectral filter optical systems, signifi cant fl uorescent background was evident which reduced the analytical performance at lower DNA concentrations to unacceptable levels. This issue was alleviated by using black Tefl on-printed slides which served to signifi cantly reduce background. All measurements made in this work utilized black Tefl onprinted slides.

All DNA measurements were blank corrected. Signal to noise (S/N) determinations at each DNA concentration were made using blank subtracted mean fl uorescence divided by the standard deviation of the DNA fl uorescence signal. Standard curves were fi t using a linear function in GraphPad Prism.

The 6-point standard curve used for the PicoGreen assay provided a working range of 10 ®C 1000 ng/mL DNA. Figure 2 demonstrates the linearity of the standard curves obtained with each optical system. Regardless of the optical system used all data collected resulted in a least means squared linear regression analysis with coeffi cient of determination (R2) values of > 0.999 for n=3 experiments. It is evident from the slopes of the standard curves that the spectral fi lter systems provide slightly higher sensitivity than the monochromators. 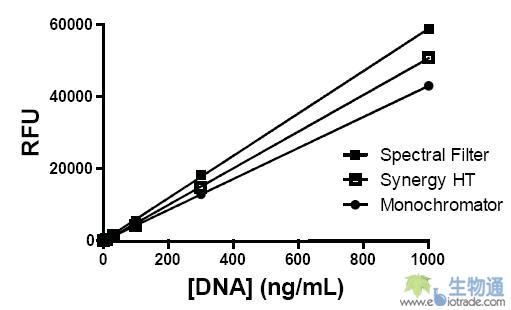 Figure 3 demonstrates S/N determinations at each of the DNA concentrations used in the standard curve for all the optical systems used. It is evident that signifi cantly higher S/N is available with the monochromator optical system at low DNA concentrations (°Ð 100 ng/mL). This is due to the lower background signals associated with the smaller cross-section of the detection volume provided by the monochromators. The increased light throughput associated with spectral fi lter systems tends to provide higher S/N at higher DNA concentrations (°ð 100 ng/mL). 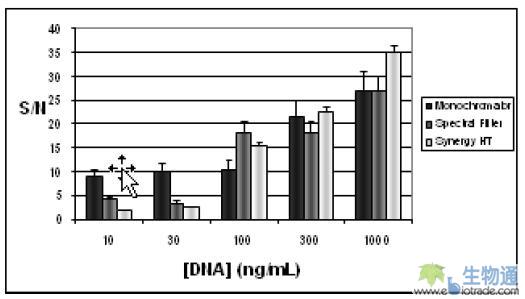 Figure 3. Signal to Noise (S/N) determinations at each DNA concentration used in the standard curve for each of the Microplate Readers and respective optical systems. S/N is defi ned in the Materials and Methods section. Error bars reflect cumulative error (standard deviation) in blank and DNA measurements.

The availability of 16 microspots on the Take3 provides the ability to generate standard curve and unknown sample data at the same time. By performing the assay and measurements in the same vessel quantifi cation errors caused by differences in incubation time, temperature and sample manipulation are minimized. Using the Take3 plate map defi ned in Figure 1, the accuracy of two samples of known concentration, one at low DNA concentration (25 ng/mL) and another at higher concentration (500 ng/mL) were quantifi ed using the monochromator optical system of the Synergy H4. Excellent accuracy was observed at both concentrations: + 1.6% accuracy at 25 ng/mL DNA (over-estimation) and ®C 3.0% accuracy at 500 ng/mL DNA (underestimation). Similar performance was seen across the Synergy Microplate Reader product line.

The Take3 plate is a useful tool for performing fluorescent micro-volume assays such as low concentration DNA quantifi cation down to low ng/mL concentrations. This effectively extends the dynamic range for DNA quantification by approximately three orders of magnitude relative to measurements involving native absorbance at A260. The in-situ protocol where samples, standards and PicoGreen regent are successively added to the Take3 plate provides the means to simplify workflow, conserve sample and reagent and improve the accuracy of determination. The Take3 plate can be used across the Synergy Microplate Reader product line for micro-volume analysis. 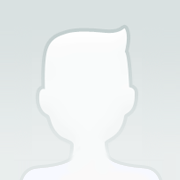